In the latest issue of the Moneda Unica Magazine, there is a report on the intervention of Jesús Jiménez, CEO of FOCE, in the Round Table on the Vision of Spanish companies succeeding in Africa.

Jesús Jiménez, CEO of FOCE, referred to business positioning in sub-Saharan markets. To do this, said the business executive, it is necessary to focus on the dynamics that African markets have been demanding for some time, which is industrialization in urban environments.


This is where great commercial and investment opportunities will be generated. In support of this, Jiménez said that there are more metropolises in Sub-Saharan Africa than in Europe or the USA and that this phenomenon has a market drag, being an important vector for companies to focus on repositioning themselves in the African market. Urban concentration, demographic increase and young labor force is the reality in Sub-Saharan Africa.


The new governance and industrialization processes are noteworthy. Today Africa is becoming more and more technified and internationalized, said the CEO of FOCE. As main difficulties that a Spanish company may encounter in accessing the African market, Jesús Jiménez cited competitiveness and the perception of risk. Regarding the former, he said that we lack unity of action in the administrations to achieve competitiveness and that, compared to our competitors, there is a lack of high-level institutional presence that is decisive.


Regarding risk perception, he said that Spanish businessmen are still anchored in certain comfort markets such as Latin America, not realizing that, with the risk classification criteria of some African countries, we are better positioned than in countries such as Honduras, Nicaragua, El Salvador, Ecuador, Argentina, countries where the Spanish businessman who had an opportunity would jump without hesitation. 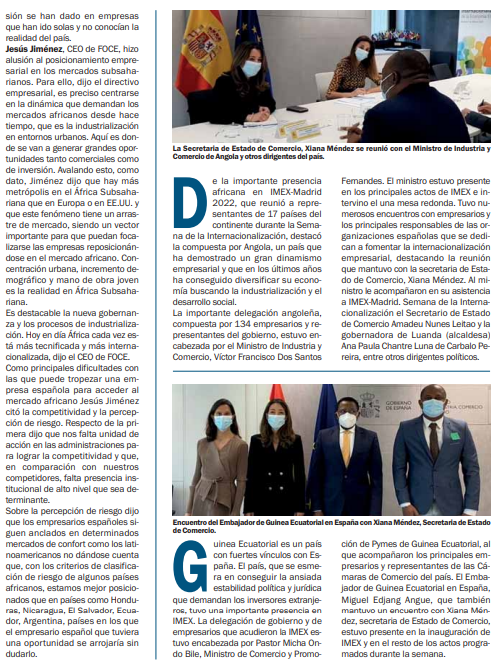